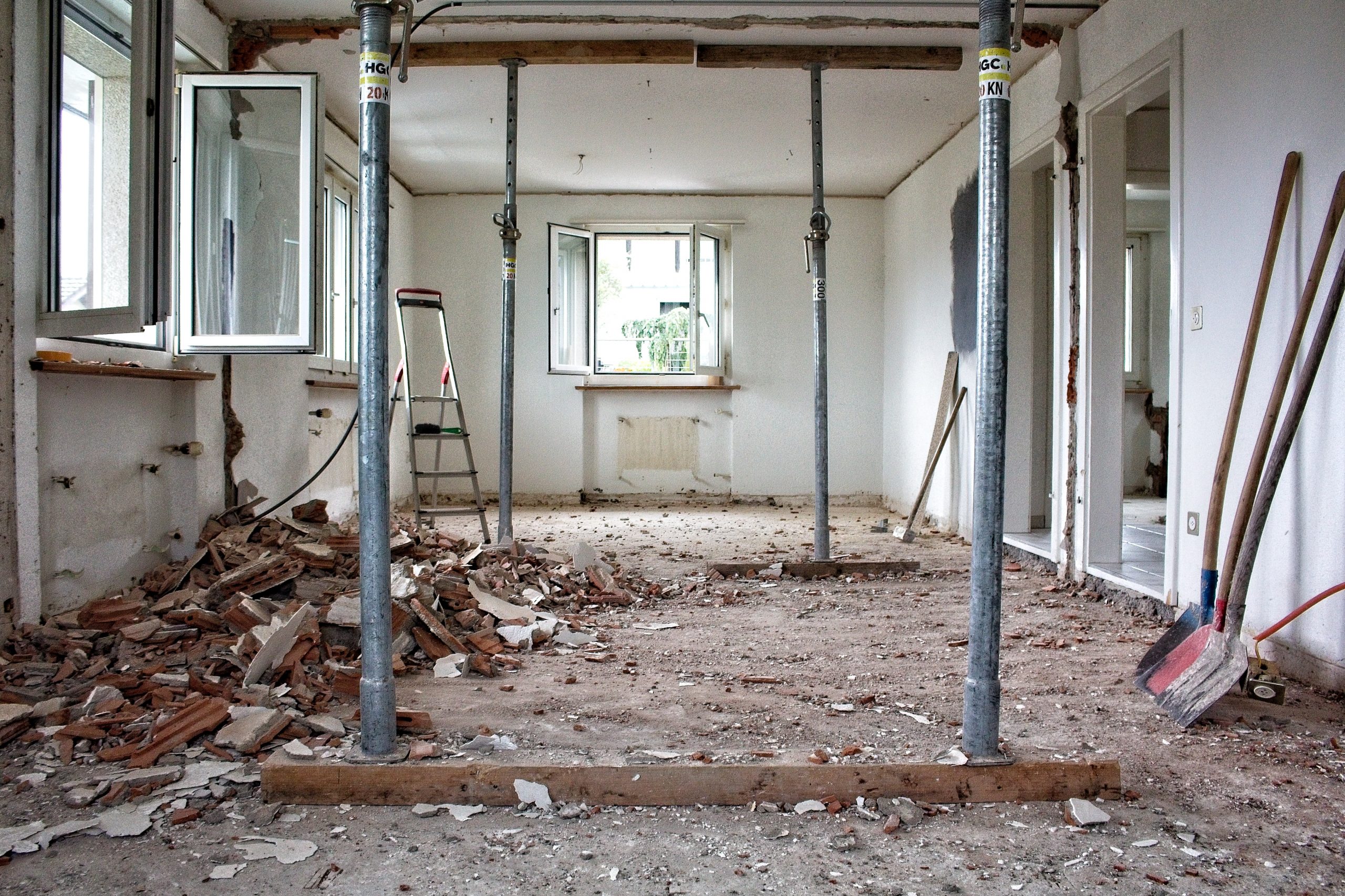 The Interpretation Statement then sets out where you can find the right depreciation rate for buildings when fit outs attached to buildings may be depreciable. How to treat an improvement of a building for depreciation purposes. And then finally, what happens when the building is disposed of or its use changes?

To recap, depreciation for all buildings was reduced to zero, with effect from the 2011-12 income year. Back in 2020 as part of the initial response to the pandemic, the Government reintroduced depreciation for non-residential buildings with effect from the start of the 2020-21 income year. Generally, the depreciation rate is 2% on a diminishing value basis, or 1.5% on a straight-line basis. Some other depreciation rates may be used where the building has a shorter than normal useful economic life. Examples would be barns, portable buildings or hot houses. Additionally, it’s possible to claim a special rate if the building is used in an unusual way.

In some cases, a fit out can be separately depreciated depending on the nature of the building and the nature of the fit out. Where the fit out is considered structural to the building or used to weatherproof the building it must be treated as part of building and not depreciated separately. Fit outs are depreciable in a wholly non-residential building and sometimes in a mixed-use building. But remember, the key point is that depreciation is not available under any circumstances for a residential building. So overall, this is a useful Interpretation Statement and is also, as has become the norm, accompanied by a very handy fact sheet.

The agencies tackling organised crime and its tax evasion

Moving on, last week I discussed a suggestion by ACT Party leader David Seymour to use Inland Revenue against the gangs. I looked at the powers available to Inland Revenue and discussed how practical his proposal was. To summarise, Inland Revenue has extensive powers which would be useful in tackling gangs and organised crime. However, this is a resource intensive approach which probably in Inland Revenue’s view, would divert its attention from other areas it considers equally important.

This prompted some discussion in the comments section and thank you again to all those who contributed. As I said, my view is Inland Revenue probably thinks other agencies, such as the Police, are better suited for this activity. But it will cooperate with those agencies. Its annual reports make clear they pass information to other agencies. So Inland Revenue is probably working on this matter in the background.

It was interesting just to take a look to see what other agencies were doing in this space and get a gauge of what’s happening.  A key tool for the Police is the use of restraining orders to seize assets. According to the Police’s Annual Report for the year ended 30th June 2021 the value of restraints for the year totalled just over $100 million, including nearly $30 million seized from anti-money laundering. 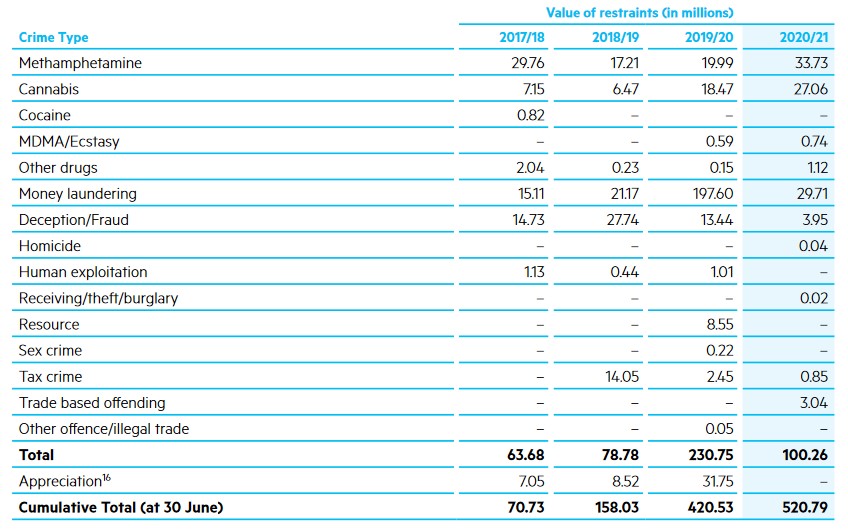 The Department of Internal Affairs also has responsibilities for anti-money laundering, as it’s a key regulator on that. Its Annual Report to June 2021 indicates that perhaps it could do more in this space, as its budget for its regulatory services for the year was set at $52 million, but it only spent $44 million.

And then when you look at the DIA’s performance metrics, such as desk-based reviews of reporting entities, it’s supposed to be targeting between 150 and 350 such reviews annually, but managed only 219 for the year, up from 198 in the previous year. And on-site visits were meant to be somewhere between 70 and 180 but came in at 79. To be fair these were probably disrupted by the impact of COVID 19.

Still, there are other agencies involved in pursuing gangs including Customs who will also be very interested. Inland Revenue will be playing a role, it shares information with these other agencies. So even if it’s not wielding a very big stick publicly, it’s working in the background.

The interaction of tax and abatements on social assistance

Now tax has been in the news a lot recently with the election coming up even though it’s still just over a year away probably. National and the ACT Party have both set out they would proposed some tax cuts. Last Saturday, Max Rashbrooke, a senior associate at the Institute of Governance and Policy Studies, who has written quite a lot on wealth and taxation put out some counter proposals to National and ACT’s proposals.

He suggested that really the focus should be on middle income earners. And he made a suggestion, for example, that we could have a $5,000 income tax free threshold, something we see in other jurisdictions. Britain’s is just over £12,500, Australia’s is A$18,200 and the US has a slightly different thing. It gives you a standard deduction of US$12,000. But anyway, let’s take that comment elsewhere. And Max suggested that something could be done in that space.

But it got me thinking about the question of who does actually pay the highest tax rates in the country. And the answer isn’t those on over $180,000 where the tax rate is 39%, it’s actually more around $50,000 mark if those people are receiving any form of government assistance, such as Working for Families. If they have a student loan as well, then an additional 12% of their salary after tax gets deducted.

The interaction of tax and abatements on social assistance, such as the family tax credit and parental tax credit can mean in some cases, the effective marginal tax rate for some families is more than 100% on every extra dollar they’re earning. This is an issue which the Welfare Expert Advisory Group touched on, but the Tax Working Group wasn’t allowed to address. But it’s a huge problem.

Take, for example, someone earning $50,000, just above the $48,000 threshold where the tax rate goes from 17% to 30%. And that, by the way, is the rate where I think we need to focus our attention on adjustments to thresholds and tax rates. At that level every extra dollar they’re earning is taxed at 30%. If they’ve got a student loan then they pay a further 12%. If they have a young family and are receiving Working for Families tax credits, then these are abated at 27%. Incidentally, the abatement threshold is $42,700. So that means that that person is on a marginal tax rate of 69%. Definitely not nice.

In my view, this is the area where we really need to be thinking about changing the tax system, because to compound matters, governments have been very cynical about not adjusting thresholds for inflation, something I’ve raised repeatedly in the past.

Working for Families thresholds were adjusted for inflation every year until National was elected in 2008. Starting in the 2010 Budget they started freezing thresholds. They also increased the abatement rate which used to be 20% and is now 27%. The current Working for Families abatement threshold is $42,700, which is less than what someone working full time on the minimum wage will earn annually

So this is an area where governments of both hues have been really quite cynical in my view, and where a lot of serious thought needs to go in about trying to address the inequities that have arisen. The Welfare Expert Advisory Group suggested the abatement rate should be 10% on incomes between $48,000 and $65,000, then increase to 15% before rising to 50% on family incomes over $160,000. (Yes, large families with that level of income could be receiving social assistance in some instances).

There’s a lot of work to be done in this space and inflation adjustments to thresholds is something that should be done anyway. But I think we need to think carefully around the thresholds and how the interaction with social assistance works. At the moment we’re not getting that sort of analysis from either any of the main parties and that’s disappointing, as it’s something that really needs to be addressed.

Why the FER deals with recurrent taxes better

And finally this week, just hot off the press is an OECD report on Housing Taxation in OECD countries. This makes for some interesting reading. Briefly, the report is concerned about how housing wealth is mostly concentrated amongst high income, high-wealth and older households. And in some cases, they believe that a disproportionately large share of owner-occupied housing wealth is held by this group. There’s been unprecedented growth in house prices, not just in New Zealand, but across the whole OECD, making housing market access increasingly difficult for younger generations.

In terms of suggestions the OECD believes that housing taxes are “of growing importance given the pressure on governments to raise revenues, improve the functioning of housing markets and combat inequality.” The report notes the way housing taxes are designed often reduces their efficiency. Recurrent property taxes, such as rates, are often levied on outdated property values, which significantly reduces their revenue potential. This also reduces how equitable they are because where housing prices have rocketed up, people are underpaying based on current values. And conversely people in places where prices are falling or have been stagnant are paying more relative to those in richer areas.

One of the suggestions the report makes is that the role of recurrent taxes on immovable property should be strengthened, by ensuring that they are levied on regularly updated property values. And this is one of these reasons why Professor Susan St John and I have been promoting the Fair Economic Return approach. One of the strongpoints of our proposal would be strengthening the role of recurrent taxes.

Another proposal would not at all popular. It is to consider capping the capital gains tax exemption on the sale of main houses so that the highest value gains are taxed. This should strengthen progressivity in the system and reduce some of the upward pressures. This is what happens the U.S. There is a US$250,000 exemption on the main home per person, and above that the gains are taxed. There’s no reason why we shouldn’t have a similar type exemption here if we want to introduce a capital gains tax. But as I said, that would be particularly unpopular.

The OECD also believes there should be better targeted incentives for energy efficient housing, because housing, according to this report has a significant carbon footprint, maybe 22% of global final energy consumption and 17% of energy related CO2 emissions.

So, there’s a lot to consider in this report, and we come back to it and consider it in more detail. But again, it sort of comes to this point we’ve talked about repeatedly on the podcast, the question of broadening the tax base and the taxation of capital. These issues aren’t going to go away, particularly when you consider, as I mentioned a few minutes ago, how very high effective marginal tax rates are paid by people on modest incomes who may not have any housing. No doubt we’ll be discussing all these issues sometime again in the future.

Well, that’s all for this week. I’m Terry Baucher and you can find this podcast on my website www.baucher.tax or wherever you get your podcasts. Thank you for listening and please send me your feedback and tell your friends and clients.