So, much as expected, no headline tax surprises again. We will have to wait until next year for any changes to tax thresholds Interestingly, the matter of increasing thresholds was not raised with the Finance Minister during the Budget Lockup, although he addressed that in part by arguing the cost of living payment was better targeted than a general across the board threshold adjustment.

The ongoing (but not quantified) effect of fiscal drag means tax revenue for the year ending 30th June 2022 is expected to cross the $100 billion mark for the first time to a total of $103.8 billion. The main growth is from PAYE, forecast to rise by $3.7 billion to just under $42 billion and corporate income tax projected at $16.7 billion up nearly $2 billion. (That includes an estimated $322 million from the New Zealand Superannuation Fund, down an eye-watering $1.8 billion from 2021 – illustrating the impact of the recent turbulence in financial markets, thanks Vladimir). GST receipts are also up over $1.2 billion from June 2021 to an expected $25.7 billion.

The big announcement was the cost of living payment of $350 in three monthly instalments starting 1 August (about $27 per week). The payment will be available to individuals who earned less than $70,000 per annum in the past tax year, and not eligible to receive the Winter Energy Payment – approximately 2.1 million New Zealanders.  It will cost an estimated $814 million.

Eligibility for this payment will be determined by a person’s income for the March 2022 year. Most of those eligible will have their income determined by Inland Revenue’s auto-assessment process which is now underway. The payment is therefore an incentive for eligible taxpayers who have to file a tax return to do so as soon as possible. Not entirely sure my tax agent colleagues will welcome that development.

The temporary reductions in Fuel Excise Duty and Road User Charges will be extended for a further two months at an estimated cost of $235 million.  Half-price public transport is also extended for a further two months and will be make permanent for 1 million Community Services Cardholders which seems a good initative. Extending half-price public transport should be a measure which helps in reducing emissions.

Small businesses are an important part of the economy, so the proposed Business Growth Fund is an interesting move. The Crown will initially invest $100 million alongside private banks. Through the Fund the Crown will take a minority interest in SMEs where equity finance would be more appropriate than debt finance.

The intention is for the BGF to be an active investor providing growth capital, but it would not take a majority position although it would have a seat on the board. It’s an interesting development based on similar initiatives in the UK, Ireland, Canada and Australia so we will watch with interest.  Personally, I think a permanent iteration of the Small Business Cashflow Scheme would be a good long term initiative.

Although there were no specific funding initiatives for Inland Revenue it’s interesting to dig into the formal Vote Revenue Appropriation. The total 2022/23 appropriation for “Services for Customers” is $721.8 million, an increase of $120 million or near 20% from the 2021/22 appropriation of $600 million.  This increase is mainly due to re-categorisations and transfers including a transfer of $55.8 million for ongoing operating costs arising from the Business Transformation programme.

Breaking it down there’s an extra $9.4 million for investigations and over $37 million for tax return processing, both of which reverse falls in funding in the 2021/22 appropriations. The biggest increase though is for Services to Ministers and to inform the public about entitlements and meeting obligations which is up $56 million or 21,7% from 2021/22. I expect some of this will be to remind people of their eligibility for the cost of living payment, but there may also be initiatives about tax obligations and the cash economy. 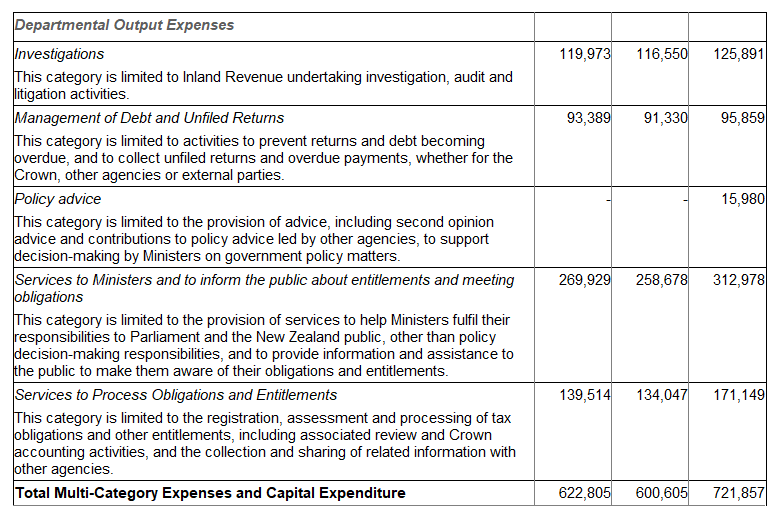 In summary, a very boring Budget from a tax perspective although leaving income tax thresholds unchanged for another year is now something of a political hot potato for the Government.  The intention appears to be to address this in next year’s Budget which is of course an election year. We shall wait and see.