Inland RevenueIRSNZ TaxOECD
The Week In Tax · More on the cost of living payments, the sustainability of the tax system, Biden’s tax deal & more

The Budget information document release on Thursday caused a bit of a stir and some excitable commentary. A few points stood out for me, particularly in relation to the ongoing controversy over the cost-of-living payment and its delivery by Inland Revenue.

We already knew Inland Revenue was less than happy to be involved in it, but some of the further documents released shed further light on it.  Treasury’s recommendation was,

“…if you wish to progress with the payment along the lines of the commission[sic], the Treasury recommends that Inland Revenue be the delivery agency, given they are the agency best placed to deliver such a broad payment in the short term.”

Inland Revenue, on the other hand, didn’t want to be involved because,

“…delivering this payment, which is estimated to require around 1,000 staff at its peak for around two months, would have critical operational impacts on Inland Revenue while delivering the current COVID 19 economic supports. The addition of this payment to the portfolio of services that Inland Revenue already delivers would severely compromise Inland Revenue’s already stretched workforce.”

That’s quite an admission from Inland Revenue. I guess some of the controversy about accidental overpayments of the cost-of-living payment to ineligible recipients is an assumption that Inland Revenue is highly efficient. In reality once humans are involved then on the precept of “garbage in, garbage out” there were always going to be a few errors involved.

What concerns me about Inland Revenue’s admission, though, is it does seem to point to perhaps the organisation is a little bit too lean and mean after its staff has been cut quite substantially by over 20%. We know it makes extensive use of contractors which as we discussed last year, led to an Employment Court case, which it won, by the way. On the other hand the admission that basically it needs to increase its staff by about 20% to manage something like this points to perhaps Inland Revenue being more stretched than it ought to be in staffing levels.

And that also indirectly does raise some questions about Inland Revenue’s enhanced capability following completion of its Business Transformation project. It is perhaps too simplistic to think that a couple of pushes of buttons is all that was needed to enable the cost-of-living payments to be made. But it does strike me as surprising that Inland Revenue has to devote a thousand staff and additional resources to deliver the payment.

Now, one of the other criticisms that emerged has been made about the payment is that only 1.3 million people have received it so far of the estimated 2.1 million. But in reality, it was known beforehand that all 2.1 million estimated eligible people would not receive a payment straight away. One of the papers notes,

“around 25% of potentially eligible recipients, around 500,000 individuals, will not receive this payment during the proposed August to October window because their assessment for the 2020 122 tax year is not complete”.

The paper goes on to explain that based on tax filing information for the year ended 31st March 2020,

“…around 38% of people who submitted an IR3 did so by the end of July, and 53% by the end of September 2020. Assuming the same pattern for the 2021/22 tax year, Inland Revenue expects there will be a long tail of IR3 filers who would not receive their cost-of-living payment during the proposed payment window.”

The paper notes this will mean Inland Revenue will have “increased contacts” as people will be asking why they haven’t received a payment. This will then “have an impact on other services for taxpayers” such as Working for Families.

This is quite a reasonable point. But, of course, politics has intervened. And when you’re beating a dog, any old stick will do. So, the Government is copping it for what was obviously something that would have happened in the first place.

“Meeting these new targets consistently will require you to maintain a balance between revenue and expenditure. Over the medium term this would require significantly constraining spending growth, unless your revenue strategy is adjusted to maintain a higher level of tax revenue-to-GDP in later years.”

As the Herald noted, that would mean finding new taxes to leave spending as a share of the economy higher over the long term.

Now, one of the reasons the Tax Working Group recommended a capital gains tax was it had considered the long-term fiscal sustainability of the tax system based on the then current spending trends. Its Submissions Background Paper in March 2018 pointed out that based on then current projections, the Government’s primary expenses would rise steadily to reach 31.1% of GDP by 2030 and would actually mean that there would be a deficit of. 1.2% of GDP by then.  The TWG recommended steps were needed to widen the tax base. 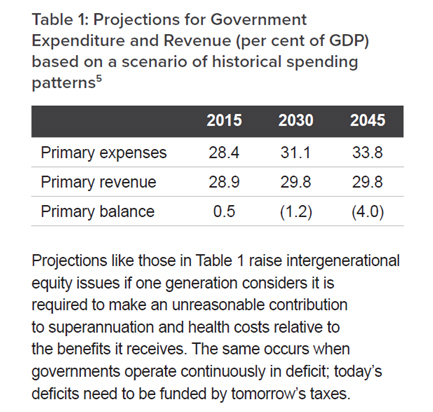 Those issues have not gone away and in fact will have been exacerbated because of the increase in borrowings that the Government incurred as a result of the COVID 19 pandemic.

We are not really having a discussion around how are we going to fund an ageing population, the increased demands on health and, as I pointed out last week, adapting to climate change. Every government seems to be stuck around keeping tax limited to 30% of GDP, Bernard Hickey has a long series of very interesting commentary on this.

The Budget documents don’t really address that issue in my mind, and it’s something that, as I’ve said beforehand, we’re going to need a serious discussion around how we expand our tax base and manage these pressures. Superannuation, remember, is now the second single biggest item of Government expenditure.  This discussion isn’t going to go away and inevitably it’ll come back to the question of taxation of capital. We probably see the politicians fence around it during next year’s election. But those pressures will remain.

Now, speaking of politicians under pressure, President Biden had been struggling to get his Inflation Reduction Act through Congress. But this week he managed to do so after a few recalcitrant senators finally came on board.

There’s a couple of interesting implications about this. Firstly, it appears to move forward the possibility of America coming on board with the OECD’s global tax deal. And in particular, the Pillar Two proposal for a minimum corporate tax rate of 15%.

However, it’s emerged that the Biden administration’s changes to the bill in order to get it passed appear to be at odds with how the minimum 15% corporate tax rate % is going to work. The details are a bit complicated, inevitably, but the corporate minimum tax of 15% will apparently only apply to the book income, that is income reported in financial statements of companies with revenue over US $1 billion. It will also only apply on a group level rather than at a country-by-country basis, which is contrary to the intention of the OECD tax deal, of eliminating the practise of setting up subsidiaries in tax havens.

Some international tax experts are saying the Biden deal may not now actually be compliant with the global tax deal. That possibly opens it up for other jurisdictions to say “Hang on, we’re not going to have that”. But ironically, it appears that US multinationals may in fact be keen to get the OECD Pillar Two deal passed through, because otherwise they may be exposed to additional taxes. So, watch this space. The point is, the Inflation Reduction Act is progress even if there are ructions still going on in Europe with Hungary now putting a spanner in the EU’s need for unanimity to agree the deal.

The other quite interesting thing that emerged is that the US Internal Revenue Service, the IRS, got US$80 billion of extra funding. And there’s a story from the Washington Post which explained why it needed that funding.

It includes an absolutely extraordinary photograph of the cafeteria in an IRS office in Austin, Texas. All that is visible is boxes and boxes of paper files, because the IRS had, as of the end of July, a backlog of 10.2 million unprocessed individual returns. 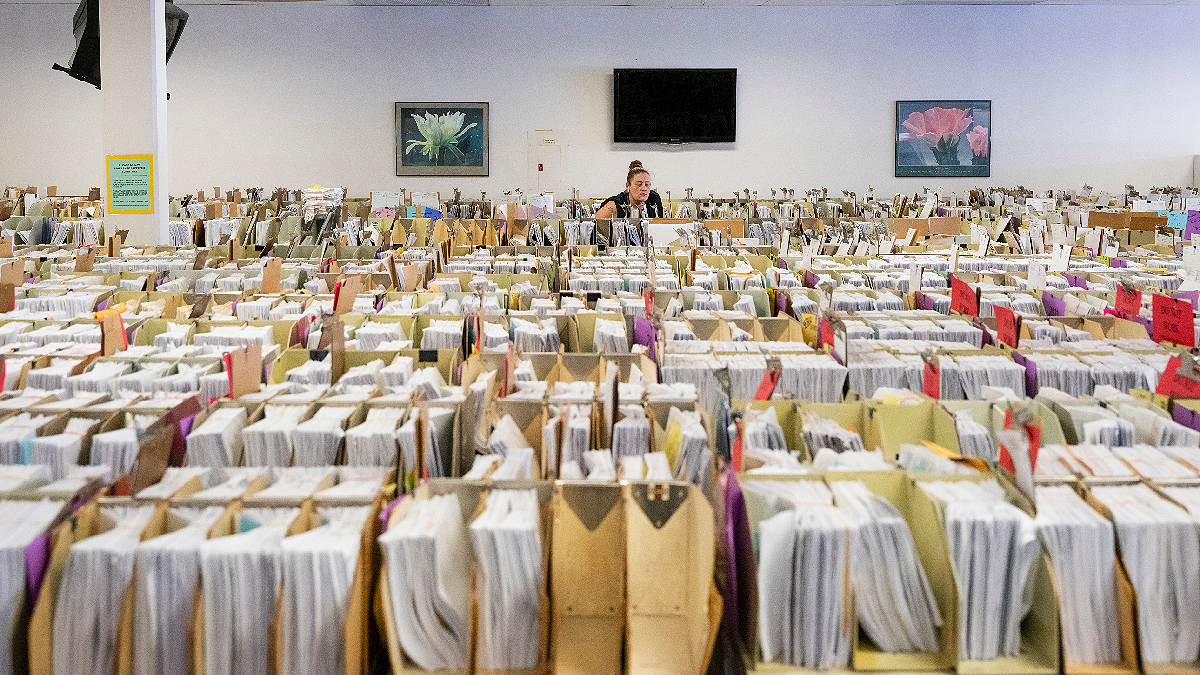 To give you an idea just how archaic the IRS’s system is, paper tax returns aren’t scanned into computers. Instead, IRS employees manually keystroke the numbers from each document into its system, (this is what Inland Revenue previously had to do until its Business Transformation programme).

It is absolutely extraordinary what’s going on with the IRS. I suggest every time you feel that Inland Revenue has dropped the ball and is hopelessly inefficient, thank God you’re not dealing with the IRS. We had a situation where we sent the IRS a letter in January 2020 and we did not get a reply until August 2021, and we were possibly one of the lucky ones.

But what was also revealed was how Inland Revenue had applied its increased discretion to write off use of money interest as a result of the COVID 19 pandemic. The total amount remitted between 10th June 2020 and 4th of July 2020 was $104 million, which is way above what I would have ever estimated.  This amount probably relates to well over $1 billion of debt, possibly as much as $2 billion. It gives an idea of the fiscal impact COVID 19 has had and will probably continue to have.