Inland Revenue is currently gearing up to begin processing 31st March 2022 year-end tax returns and personal tax summaries. Starting later this month it will be issuing automatic income tax assessments for most New Zealanders. But in preparation for that it has been giving updates to tax intermediaries on particular matters of interest. And a couple of notifications in the latest release caught my eye.

Firstly, there is form IR833 bright-line residential property sale information return which is required to be completed whenever a transaction which is subject to the bright-line test has taken place during the tax year. What Inland Revenue is saying is the form will pop up in a client’s return if it thinks the client has made a bright-line sale. And it will also pre-populate the information on the form, including the title number, address, date of purchase and date of sale.

This illustrates something we’ve spoken about many times, the level of information that’s available to Inland Revenue. It’s actually very good, in my view, that Inland Revenue is proactively putting in this information and saying, “Well, we know this.” I am aware that a few tax agent colleagues have had some very interesting discussions with clients where this notification has popped up and it’s the first the accountant or tax agent has heard about the matter.

As of last income year, all portfolio investment entity (PIE) income must be included in individual income tax return. Inland Revenue will pre-populate returns with the relevant data but not all returns will contain all the PIE information until after the PIE reconciliation returns and filed on or before 16th May.

In the meantime, Inland Revenue has reminded tax agents about this and advised not to file March 2022 tax returns either through Inland Revenue’s myIR or other tax return software until after that date unless you know for certain that the client is not a KiwiSaver member and does not have any other PIE income. That’s something to keep in mind because I’m sure some tax agents will be under pressure from clients who think that they are due a refund but haven’t factored PIE income into the equation.

What’s also going into tax returns is details of payments received under the Wage Subsidy Scheme, Leave Support Scheme and Short-Term Absence Payments. All these are what are termed reportable income. Consequently, tax returns will be required to be filed by recipients and there is going to be an information request in relation to these as part of the tax returns. Yet again, this is another example of how MSD and Inland Revenue shared the relevant information.

Inland Revenue administers the highly successful Small Business Cashflow Scheme which gave out loans to small businesses at the start of the pandemic. The initial two-year interest free period is now expiring for some businesses so repayments will be required to start shortly.

Talking about COVID-19 support, the numbers involved were quite extraordinary: apparently MSD has so far paid out $19.28 billion in the various subsidies and leave support payments. And Inland Revenue has paid out another $3.95 billion including Resurgence Support Payments and COVID-19 Support Payments.

The Resurgence Support and COVID Support payments were paid to businesses to help them pay business costs and therefore GST output tax is required to be returned on those receipts. Where the funds are used on relevant expenditure GST input tax credits may be claimed.

Inland Revenue has started checking that those who claimed the support payments were entitled to do so and assuming they passed that hurdle, they then applied the expenditure as was intended, i.e. business expenses. And I’m hearing stories from tax agents of very thorough investigations combing through the bank accounts of the businesses and individuals who received these payments. Some have resulted in “Please explain” enquiries coming back where  apparently personal expenditure has been identified such as in one case where an EFTPOS payment for  McDonald’s was identified.

This is yet another warning for those who applied for COVID support payments they either weren’t entitled to or misapplied the payments that they may find themselves under the gun from Inland Revenue. So far Inland Revenue have decided to proceed with 15 criminal charges and court proceedings are already underway for seven. In addition, as a result of investigations and some self-reviews the repayments made to date to MSD are over $794 million. ,

All of this is a timely reminder that with things calming down a little bit and so coming back to a stability, Inland Revenue is now applying itself back to its core business activities of investigations and reviews. Expect to see more news of these reviews and I think we may see one or two interesting cases emerge.

Moving on, last week’s speech by the Minster of Revenue David Parker quite predictably caused a stir and there was plenty of politicking over whether or not the proposal would lead to the introduction of wealth tax at some point and whether the Prime Minister would stand by her comments it wasn’t going to happen, the usual politicking etc. etc.

Subsequently, last Sunday I appeared together with Jenée Tibshraeny of www.interest.co.nz  on TVNZ Q&A to discuss the implications of Mr. Parker’s speech. Off-air Jenée made a point echoed by several colleagues commenting on a LinkedIn post that the Tax Principles Act, if enacted, would work both ways. It wasn’t just a tool for saying, “Well, we need to introduce a particular type of tax.” It could equally stop a government introducing changes because it contradicted the agreed principles.

It’s a very valid point and it’s actually one of the sources of disagreement with the introduction of the 39% tax rate, because it affects the integrity of the tax system and the idea of administrative efficiency. Furthermore, it could apply to the measures relating to personal services, income attribution, which also I discussed last week. The argument here is that these rules would breach potential principles of horizontal equity, in that people earning similar amounts, may pay different rates of tax because of variations in the tax treatment.

Other interesting insights have emerged in the wake of the speech. The Revenue Minister pointed to the lack of information about the high wealth individuals which prompted the research project into high wealth individuals would have caused some controversy. And earlier this week journalist Thomas Coughlan in the New Zealand Herald commented on an interesting briefing note about the project he’d obtained under the Official Information Act.

Having included that caveat, the note had some interesting analysis of what they had found so far. And it had a diagram comparing the share of GDP and employment to the main activities of high wealth individuals on the basis that you could reasonably expect the share of the industries represented by the individuals to be broadly similar to the spread of industries and activities in the New Zealand economy.

But it turns out that wasn’t the case. And in particular, relative to employment and GDP shares, the property and primary sectors are disproportionately represented in this project. The number of high wealth individuals in the primary sector is approximately 15%, even though the sector represents less than 10% of GDP. In relation to the property sector the proportion of high wealth individuals is 25%, compared with approximately 15% of GDP. 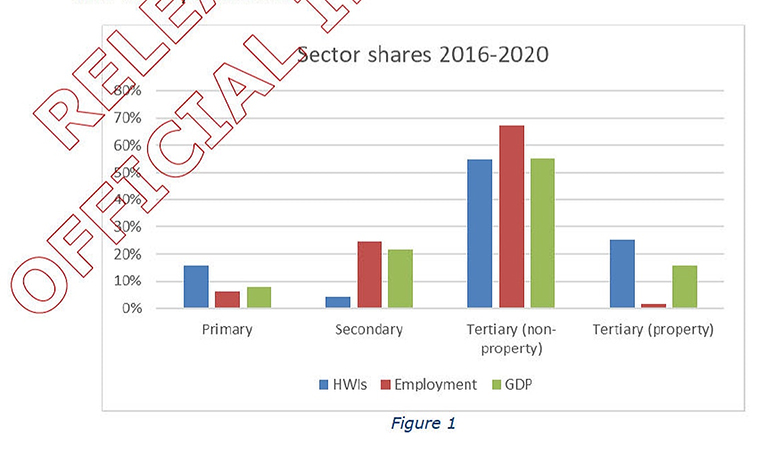 However, as the briefing note commented, there are clear reasons why there is this discrepancy “…there are certain activities (investment, property ownership) that would be expected to have greater involvement by those accumulate significant wealth….”

Incidentally, the primary sector and particularly the property sector, are sectors where existing tax rules such as the Bright-line test and the associated person rules work already to tax capital transactions. So that’s another reason why Inland Revenue may have better data on this particular group of wealthy individuals than others that work in the service economy.

Anyway, it will be interesting to see what further insights emerge from this high wealth research project. Meantime, no doubt the debate over how that data may be applied and the question of the taxation of capital and wealth will continue to rage, particularly in the run up to next year’s election.

Getting ready for tax filing season

And lastly this week, the final instalment of Provisional tax for those with a 31st March year-end is due on Monday. The key point here is taxpayers whose residual income tax liability for the year is expected to exceed $60,000, should ensure that they pay sufficient provisional tax to cover that total liability for the year. Otherwise, use of money interest, which is increasing to 7.28%, will start accruing together with potential late payment penalties.

As always, if taxpayers are struggling to meet payments in full, then either contact Inland Revenue to let them know and start to arrange an instalment plan. You will find that they are generally cooperative on this. Alternatively, consider making use of tax pooling to mitigate the potential use of money, interest and late payment penalties.

Well, that’s all for this week I’m Terry Baucher and you can find this podcast on my website www.baucher.tax or wherever you get your podcasts.  Thank you for listening and please send me your feedback and tell your friends and clients.