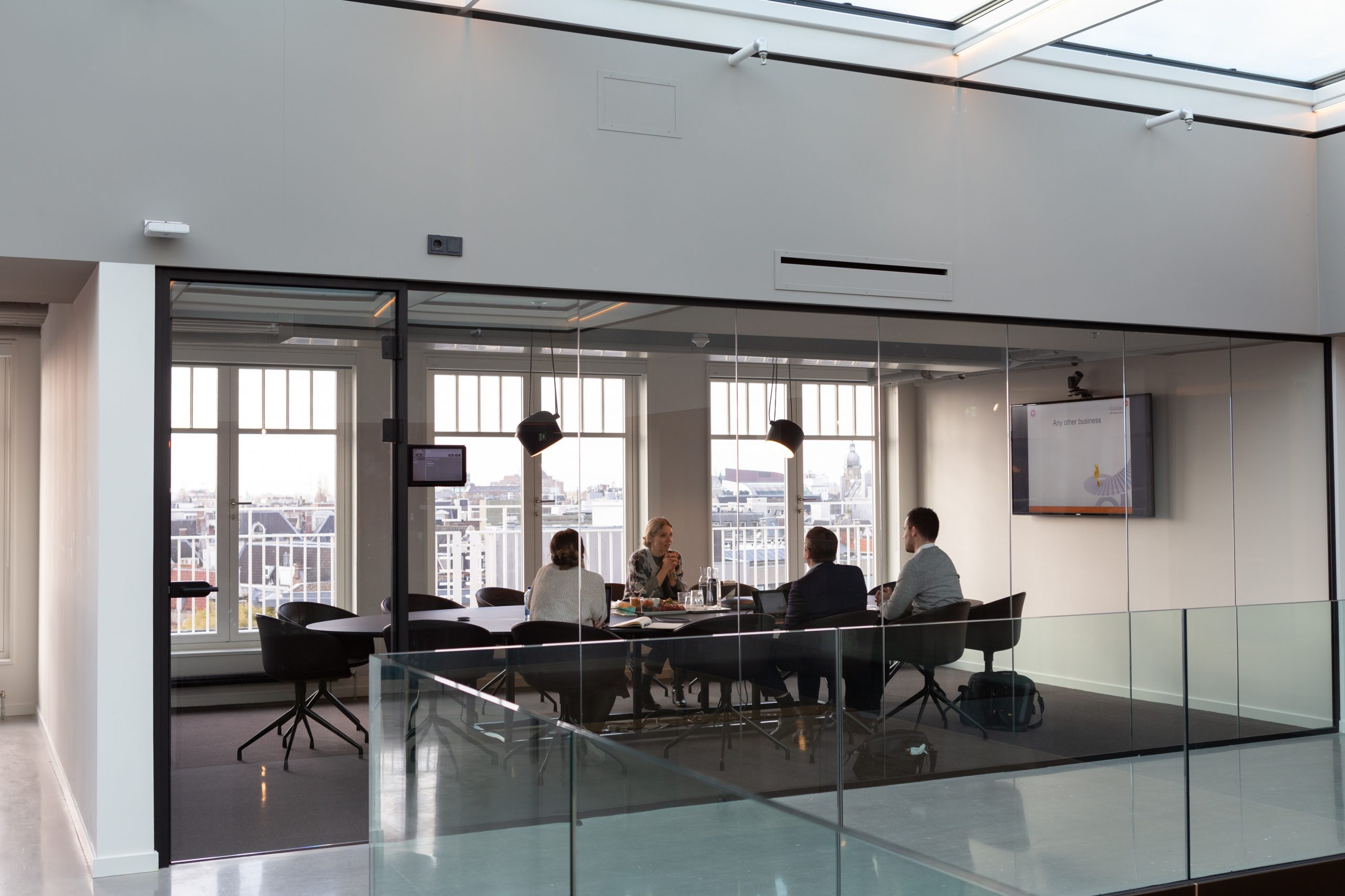 Inland Revenue has begun taking more action on outstanding tax debt. It dialed back how hard it was pushing on overdue tax debt during last year in the wake of Covid-19. But in recent weeks, its activity has stepped up, and those involved with corporate reconstructions are seeing much more activity with Inland Revenue pursuing tax debt.

There are some reports that it’s particularly targeting the housing and construction sector, but that’s not necessarily the case, as I understand it. But the housing and construction industry has a record of nonpayment. Inland Revenue is particularly concerned about those companies or individuals not keeping up to date in relation to their GST and PAYE obligations. Inland Revenue’s longstanding view is that such receipts are held on trust (because they’re being withheld from the payees) and therefore the companies have no right to the payments and need to pass them straight through to Inland Revenue.

An Inland Revenue spokesperson confirmed they were taking more action adding “We give high priority to any business that has failed to pay employee deductions when due.” In the past Inland Revenue sometimes seemed quite extraordinarily slow in taking action with overdue PAYE. But if it’s boosted its efforts in this space that’s all well and good because following Gresham’s law, bad money drives out the good. And those conscientious employees and businesses that follow the rules and make the payments as required are being undercut by more unscrupulous operators.

In that context, what I’ve been told is that Inland Revenue is also upping its efforts in relation to developers who are claiming GST on land purchases, but then failing to declare the GST when they make the subsequent sales of the properties. In some cases, you also have what they call “Phoenix companies” where there’s a pattern of developers establishing companies which then fall over leaving unpaid tax debts. Inland Revenue got itself extra powers to try and deal with those matters.  And I would expect that with its enhanced capabilities following completion of the Business Transformation programme, Inland Revenue should be on top of that situation.

As always with tax debt the key thing to do if you run into trouble, is talk to Inland Revenue. It is actually surprising how little tax debt can soon become unmanageable for people. Inland Revenue’s own research suggests that break point is as little as $10,000. This ties in anecdotally what I’ve seen.

The key thing is, if you get in front of Inland Revenue early, tell them that you have hit difficulties and want to arrange an instalment plan, they will be cooperative. Where they won’t be cooperative, and in fact they may look to take action and prosecute, is where someone persistently fails to meet their obligations in relation to paying over PAYE and GST and then tries to evade any responsibility by attempting to liquidate the company. Such scenarios increasingly will lead to prosecutions by Inland Revenue.

And this also takes the stress away from people, employers and business owners who get into tax trouble quite naturally stress about the matter and often put their heads in the sand. It’s remarkable how much of a difference to stress levels it makes once you’ve spoken to Inland Revenue, and you find is this they are prepared to come to some form of arrangement. That’s dependent on a number of factors, the key factor being willing very early on to deal with the issue.

Moving on and still talking about GST, Inland Revenue has released some draft guidance for consultation on the treatment of GST for directors’ fees and board members’ fees. This covers a number of draft public rulings and is accompanied as well by a very useful fact sheet. I’m liking how Inland Revenue is sending out a lot of these fact sheets alongside the longer papers with detailed consultation, because the fact sheets of what you can put in front of clients as they are a good summary of the issues.

As I said, these draft rulings are accompanied by a fact sheet, which includes a very handy flowchart, these flow charts and fact sheets makes life a lot easier and more understandable for those affected. The proposed rulings are reissues of previous rulings on the matter. They’re fairly uncontroversial as they generally are simply restating the law, updating the statutory references and setting it out in a clearer and more understandable format for the general public.

Elsewhere in the world President Macron in France is under pressure to consider a windfall tax on some parts of the corporate sector where high energy prices have resulted in higher profits. Britain, you may recall, imposed a windfall tax on some oil companies, although it’s come with a potential subsidy which may dilute the impact of that. Windfall taxes have no real history in New Zealand, so are unlikely to happen here. But it is to see how other jurisdictions are reacting to questions of what they perceive as excessive profiteering.

And finally, this week the Reserve Bank of New Zealand issued an Analytical Note on how the New Zealand housing market looks in the international context. What it does is compares facets of the housing market in New Zealand with those in 12 other developed countries[1] over the 30-year period from 1991 to 2021.

And it notes that several other economies, Australia is one, have experienced increasing house prices in recent years, but the rate of increase has been the highest here. Interestingly we have also seen the steepest decline in mortgage rates since the Global Financial Crisis and then almost the strongest increase in population. Apparently, although we’ve been ramping up construction quite dramatically in the past few years, the number of dwellings per inhabitant remains low and below the average for the OECD.

There was some mostly passing commentary in the note about the impact of tax. The paper does touch on the absence of a general capital gains tax commenting:

“Another feature of the New Zealand economy that may support higher housing demand is the absence of a comprehensive capital gains tax. New Zealand is unique in that aspect in the sample of countries we consider, fiscal authorities in other countries tax capital gains from asset sales at or close to the personal income tax rate.”

Being an analytical note, it doesn’t make any recommendations as to whether there should be increased taxes on housing, although the OECD has been for a long time pushing that point. It’s always interesting to consider the role of tax in our housing market and also whether the absence of the fact that housing is treated so generously for tax purposes means that investment is driven into that rather than into more productive sectors.

On that point, there’s a very interesting graph illustrating the surge in Irish GDP per capita over the last ten years or so, it’s really quite marked. The note comments that this surge

“was supported by high-performing multinational companies that relocated their intellectual property assets to Ireland attracted by lower corporate tax rates [12.5%] as well as Brexit-related uncertainty in the United Kingdom.”

Figure 4: per capita GDP in US dollars at current PPP 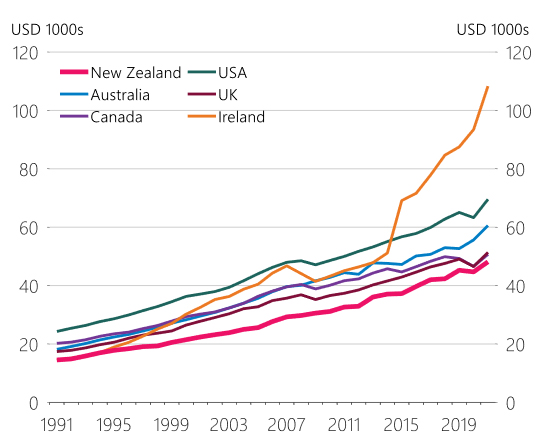 This Reserve Bank note reinforces my long held view that our favourable tax treatment of housing does divert funds away from productive investment and we need to change that treatment. As previously stated, my preference is for the Fair Economic Return approach Susan St John and I have proposed. .

Until next time kia pai te wiki, have a great week.